On Friday April 12, students in the Fulton Undergraduate Research Initiative (FURI) program presented their semester projects. QESST was well represented, six QESST Scholars presented their work. Five of these scholars participated in Testbed 1 the Student Led Pilotline.  Dr. Stuart Bowden is the supervisor of the pilot line and he was assisted by two FURI alums who are now QESST graduate students, Guy Picket and Tim Reblitz.  Also assisting with these projects is Katherine Nelson, Kunal Ghosh, and Stas Herasimenka.  The sixth student, Joe Carpenter, was supervised by Terry Alford, Professor in the School of Engineering, Matter, Transport and Energy. 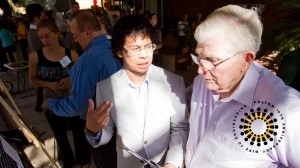 Solar cells have garnered much attention as a viable replacement for fossil fuels. To truly compete with current energy sources however, solar cells must achieve much higher working efficiencies. One barrier to obtaining this is reduced absorption of light in the blue wavelength range as caused by phosphorous concentrations in the emitter layer. Electrochemical Capacitance-Voltage (ECV) profiling is used to characterize the emitter layer to gain an understanding of how to fine-tune the phosphorous concentrations to a more desirable gradient which leads to efficiency gains in silicon solar cells.

Yttrium-doped zinc oxide (YZO) is a new n-type semiconductor with electrical properties compatible with channel layers in thin-film transistors. This could make up the display in a smart-phone or a crucial part of a transparent solar cell. Inkjet printing techniques were used to deposit the YZO films on glass substrate. The thickness of each layer is around 15 nm. The five-layered YZO films had RMS roughness of 7 nm and had lower transparency in the 550-900 nm range than the three layered YZO films, which had RMS roughness of 3.69 nm. The resistivity of the films is 0.144Ω-cm.

Phosphorus oxychloride (POCl3) diffusion is a crucial process in solar cell production. During diffusion, the wafers are placed into a high-temp furnace tube that flows N2, POCl3 and O2. The result is the formation of the PN junction. The optimization of POCl3 diffusion involves cross-boat consistency, shifting of diffusion profiles and improving blue response. Recipes with cross-boat uniformity and techniques in shifting diffusion profiles have been developed leading to improved blue response and cell efficiency. Further optimization will tailor the POCl3 diffusion for a recently developed enhanced silicon nitride deposition and lead to cell efficiencies over 18 percent.

Solar energy is a clean and renewable form of energy that has potential to become the major source of energy. Research is being carried out to determine the characteristics that may affect the efficiency of solar cells in order to make solar cells efficient enough that the price for the amount of energy is reasonable for it to become a major source of energy. The student-led pilot line at ASU trains students in the process of manufacturing cells. A website PVCDROM has been designed with background information and videos of manufacturing steps. Future work includes interviewing students to observe the effectiveness of this design.

Simulating a solar cell using computer modeling is beneficial when calculating the theoretical output of a product before manufacturing. Frequently, a single diode model is used to understand the characteristics, but a more accurate result can be achieved by a distributed model, where the cell is broken down into smaller components. This research examines the difference between the two by modeling a solar cell fabricated at the Solar Power Lab.

QESST was established in 2011 as an NSF-DOE funded Engineering Research Center. It represents a collaboration between multiple universities.